Hotels for sale in Sardinia 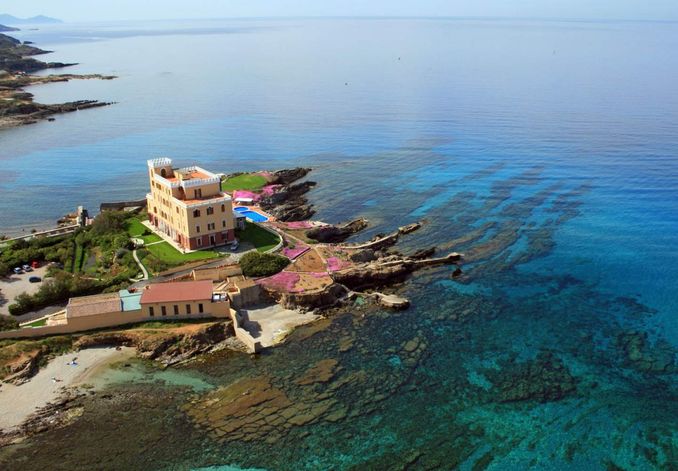 Hotels for sale in Sardinia

This splendid and unique luxury estate raises in extremely panoramic position in the seafront of the lovely village Alghero in Sardegna. Set at the top of a headland with a lush parkland of about 2 ha, it lends itself perfectly to be used as prime private residence and not just as hotel.It was built in 1880 on a watching tower’s ruins for will of the third earl of Sant’Elia and between 1918 and 1920 the garden was enlarged and the building was completely restored and partly rebuilt taking vaguely the shape of an old Medieval castle. Thanks to the several acquaintances of the Sant’Elia earls amid the foreign and Italian most influential and rich families, the villa became an important meeting place of the high society of that time: the Romanov princesses and the royal family of Italy were regular guests both in the summer and winter season. As evidence of such prestigious acquaintances and important guests, two charming living rooms, given to the house as gift by the Romanov princesses, are still admirable on the first floor. In 1959 the estate was sold to the actual owner family and was converted in a luxury hotel. After two years it was finally restored taking the present shape and layout. The estate is composed of a main liberty style villa with a surface of 1923 sq.mt. and a total of 27 bedrooms with bathrooms, of which six consist in gorgeous luxury suites, some with panoramic terrace overlooking the sea. The building also provides a restaurant and a wide modern kitchen.A second building contains a fantastic beauty-wellness center of 492 sq.mt. with Jacuzzi, indoors pool, sauna and Turkish bath. To the property belong some storehouses, laundry rooms and staff rooms.Outside there are some wide car parks, a beautiful swimming pool and an helicopter landing field set in the private garden of 18.000 sq.mt.. But what makes this object much more interesting is to be the only one noble manor in the whole island.