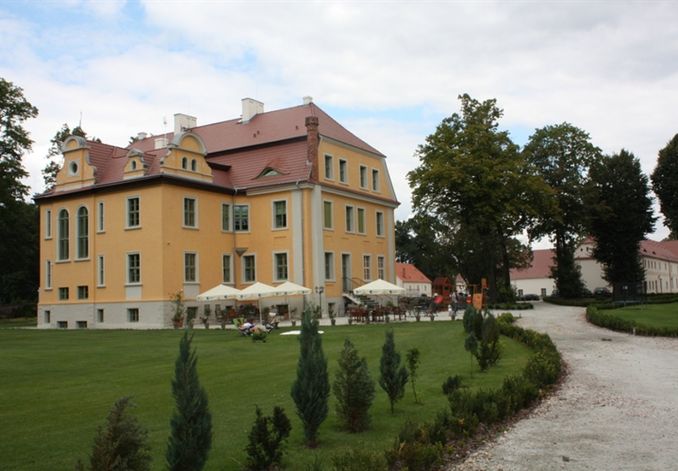 Charmingly situated hotel and park-farm complex. Intimate Baroque Palace surrounded by an old park with few and far between historic old trees. The building was built in 1790-1795. The park area consists of almost 11 hectares, upon which multiple residential buildings and renovated farm buildings from the eighteenth and nineteenth centuries are situated. Past chroniclers described the fact of arrival incognito to visit his favourite General stationed here Napoleon himself. After the Yalta Conference, ending World War II, all the palaces and manors located in Poland become the property of the State Treasury. In the year 2007, the current owner acquired the ruined Palace. In the following year, adjacent buildings are acquired and commence a 5 year, very difficult and detailed renovation in collaboration with the best specialists in the renovation of historic buildings in Poland as well as from Europe (Italy, France, and Germany). Refurbished property wins multiple awards for the implementation of the project at the highest level and with the representation of all the historical details of the property. In 2011 he property received a 4 stars hotel rating, thus the property relishes a great interest of German visitors, also due to location close proximity with Germany border (only 50 km from German border), located near the existing network of highways and airports. The property is based only 220 km from Berlin, 240 km from Prague/ Czech Republic and 140 km to Wroclaw airport. This palace has been recognised as a consecutive victor of many local prizes in 2012, 2013, and 2014. Winner of the Hotel of the Year 2014 in the category of Palaces and Castles by ***, **** , and *****. In 2014, 2015, 2016, 2017 awarded winner of european travellers choice by *******.The complex surface of the hotel is 5914 m2 consisting of 47 comfortable rooms for around 120 guests. Each room is different, depending on its nature. Specification of hotel rooms is as follows: 11 apartments in the main building, 36 rooms located in different buildings (outbuildings). The prospect of further adaptation of free space for hotel rooms in the existing banquet hall building and other buildings (40 rooms additional). There is a sophisticated playroom for children - 400m2 opened in 2018, 2 professional bawling tracks built in 2018, a room in the basement with the possibility of use for, i.e. a cigar-room. Library, as well as up-to-date kitchens, are located in the basement of the main building, 4 separate halls in the lobby are used as a best local restaurant. The separate SPA Wellness building is 1.159 m2 of usable space including a pool housing building - 238m2, pool length is 15,5m; the pool is equipped with water jets, swim jets and bikes as well as treadmills to exercise in the water. Banquet Hall building - the usable area is 877 m2. The building is adjacent to a dance hall with sectional wooden floors -150 m2 usable space. There are many conference rooms, wedding hall - 300 m2 and a storage room, air-conditioned throughout, two stylish cellars dedicated for wine tasting, renovated wine cellar - 120m2. There is also a Governors' Mansion - Tuscan Villa; usable area: 330 m2; residential building currently serving as owner's residency, consisting of five bedrooms, two bathrooms, and a large kitchen.
g an ecological certificate (red variety Rondo, Regent, Cabernet-Cortis, whit Johanniter and Solaris).Golf Driving Range with a length of 250 meters. Outside swimming pond with a sandy beach, a pier, canoe and pedal boat as well as fish stock. The owner also leases from the local municipality the former airport runway which measures 900m in length and 23m width. We are in the course of obtaining a permit for recreational and private use of this runaway. This airport is located 300m from the edge of the estate. Additionally, 24/7 private heliport was opened on the plot of the property in 2017. The generous area of the park and driving range provides opportunities to take pleasure in picnics, barbecues company and family events, as well as festivals. Endless possibilities to adapt the property for training seminars, or corporate events. Per customer request entire facility can be isolated for privacy, as the entire property is fenced in. Possibility to park more than 100 cars and several coaches.
The hotel has a great reputation and a recognisable brand. The business has generated profits from the first day since opening, the average rooms' booking rate exceeds 65 %. The complex has a great investment potential, it can be easily transformed into a 5-star hotel, a private villa property or a Summer village luxury estate by the new owner.
The selling process is run directly by the owner and his legal team. For further questions or request for additional information please contact us. On behalf of the owner and his team, we extend an open invitation to he estate.Price: USD 7000000 plus applicable VAT