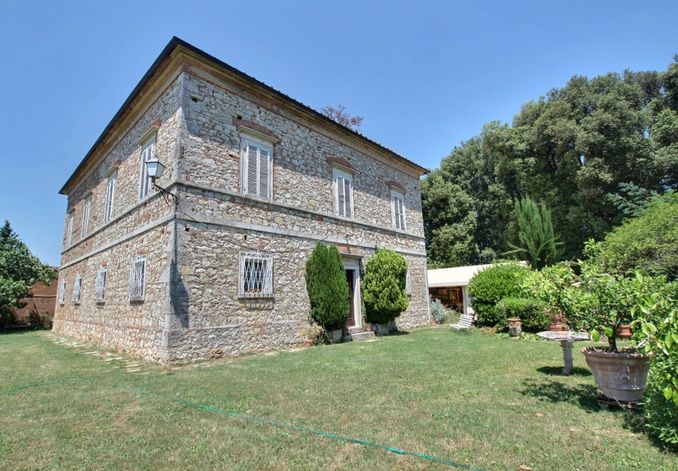 Ancient Tuscan estate on the green hills which rim the famous Crete, the sun-filled clay hills characterizing Siena landscape. It consists of the main villa, a large fenced garden, service buildings and 26 hectares of olive groves, fields and woodland.

A panoramic location linked to an all-weather asphalt road by three short graveled roads enjoying both the advantage of privacy and of a secure access to the road under any climatic conditions.

The farm buildings have been converted into luxurious country houses, either for private or for public uses, like congress halls, hotels or holiday cottages. Renowned architects, like professor Portoghesi of Rome, have contributed to some of the restructuring works. The most impressive neighbour is San Gimignanello estate, a medieval castle mentioned by Dante Alighieri.

The owner’s house, the fenced garden and the watchman’s house were designed and built for himself by an ancestor of the present landlord, an architect, around 1870. Part of the owner’s house and of the attached building lies on a cave and on foundation walls built in the XVI century. The present service buildings, which also include stables and warehouses, were built and restructured.

The estate in its present conditions permits two possible uses: as a high level holiday farm or as a large private country house. The owner’s house has been restructured in the 90ties, offering 7 bedrooms with private restrooms, communal living rooms and several large service rooms. Subsequently, the restructuring works were extended to some of the other buildings where two 2-bedroom flats for guests and two 3-bedroom flats for personnel have been added.

Two technical buildings, where grapes and olives were pressed, have been recently converted into a charming restaurant. The plants of the kitchen meet all the state of the art requirements. All the buildings have been regularly registered and enjoy the permits required to operate in the hotel industry.

Water supply is ensured by both a private deep borehole and by the municipal waterworks’.

The farming activities are focused on the olive culture: today there are about one thousand trees, some of them century-old, and it is possible to thicken the olive groves by adding one thousand more. The calcareous soil and the optimum elevation (about 400 m above sea level) result in an excellent olive oil, which is highly reputed by the connoisseurs. In case of need, the farm warehouses can host a private oil press. A 6,000 m2, properly faced, vineyard produces a local variety of Chianti wine.

The 10 hectare coppice wood is a beautiful green lung which enriches the landscape with its changing colours. It belongs to “Lecceto”, an old forest which surrounds the Lauretana road. Besides excellent fire wood, it is rich of tasty mushrooms and of rare white truffles.

Distances: 5 minutes to get to Siena-Bettolle A1 motorway, 30 minutes to Siena, one hour to Florence, less than two hours to Pisa, Grosseto, Rome.

It takes 10 minutes to get to Rapolano spas, which exploit an abundant hot water spring famous since the Etruscan times. The two spas, which have recently been revamped and expanded, are adequately equipped to offer enjoyment, beauty treatments and medical cares. They are open all the year round.